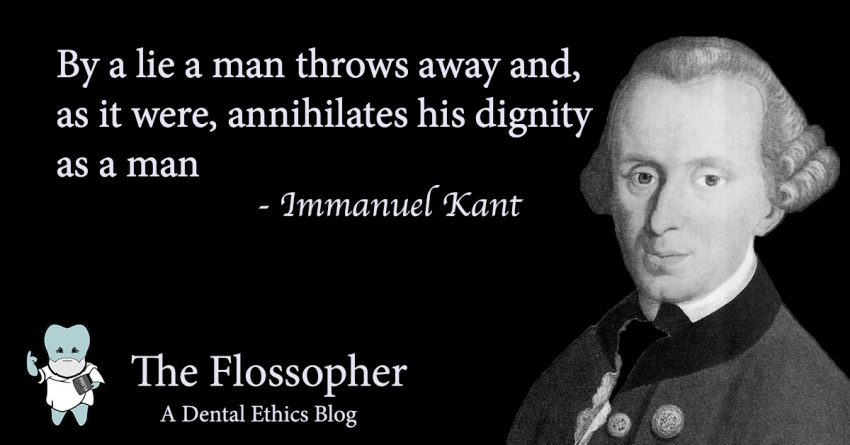 Some version of the Hippocratic Oath is taken by dental students at the start of dental school. The original version made a promise to Apollo never to ever do surgery, so dental schools have adopted updated versions. However, there is no standardized oath. It would be overwhelming to discuss each version individually in this article. So, I ask if dentists need to uphold professional oaths at all?

Dental students enter the dental field with a basic understanding of how dentistry is practiced and little knowledge of dental ethics. Having worked so hard just to get in, it would be strange to drop out of dental school over disagreement with the oath. You would be lucky to find a dentist that even remembers her dental school oath. Learn about the Hippocratic Oath and its role in the bioethical decision-making model in Intro to Dental Ethics.

The Principle of Veracity

The Principle of Veracity from bioethics is often raised to remind dentists of their professional obligations. Dentists should uphold promises so the oath made at the start of dental school is obligatory throughout a dentist’s career. However, bioethical principles are general rules for dental professions to consider and philosophically problematic to advance.

People generally agree that dentists should never lie. On the other hand, most people find white lies to be preferable in some situations, promises can expire, and only well-informed promises count. Veracity is not generally agreed as an absolute ethical requirement.

There is a more fundamental problem. Dentists take an oath to uphold bioethical principles. If we must follow oaths per the principle of veracity and we should be truthful per our oath, then we are in a vicious circle. We would lack adequate justification for upholding oaths.

An oath to the public is a customary practice of any profession. In the article on professional obligations, I discussed how dentists exploit public trust if they present themselves as professionals and do not uphold oaths made by professional organizations. Exploitation is harm and one must never harm.

If one believes doctors should not harm because one takes an oath not to harm entering a health profession, then we have a vicious circle (like above) while establishing a professional obligation to follow oaths. If one does not rely on organized dentistry for ethical guidance, then one would not hold oneself to those professional oaths. We need to look at meta-ethical theory (rational justification for ethical ideas) to better understand the obligations of dental professionals.

The duty not to harm is not merely limited to health professionals. No one should harm.

In The Republic, Plato being the first to offer a rational moral theory explains that harm is to make someone worse. In a virtue based ethical theory, the good for a human being improves, betters, and makes perfect. Since good actions would thus only improve someone, doing harm is never good.

For Utilitarians, the purpose of life is to seek happiness or well-being for yourself and others. Since harm makes people less happy and less well, there is no situation where one should do harm. For a Kantian, everyone wills happiness, so one would not will harm upon oneself or others without a logical contradiction. Review the major ethical theories in the Intro to Dental Ethics.

In ancient times, doing just actions were equated with doing the right thing. If being just requires fulfilling promises, then all dentists are obligated to uphold the oaths they take irregardless of how they present themselves. Everyone must do the right thing, of course.

Plato evaluates such a definition of justice using the dialectical method. Cephalus proposes that justice is telling the truth and paying ones debts (The Republic 331c). When a doctor takes an oath, she makes a promise and must pay that debt to society she takes upon. Socrates finds such a definition of justice merely general and not universal. He says that returning a knife to a lender that has struck madness would do her harm. Validating a past promise that does harm is not just or right.

Not all promises are worthy of obligation. The hippocratic oath does not appear to harm anyone but is designed to protect patients and the profession. How do we know when a promise is obligatory and when it is not?

An oath or promise must be followed according to Kant since we apparently have an absolute duty not to lie. According to the universalization formulation of the categorical imperative, maxims that will intentional deceit commit a contradiction of will (make exceptions to universal rules) and a contradiction of thought or concept (the practice is self-defeating). A maxim that is not contradictory in these ways are in the form of a moral law and so are obligatory.

Kant would explain that an agent that wants to lie to another would will false information upon others but upon herself. Agents intentionally lying make exceptions to the rules they will to others. So, lying cannot be a moral law of morality (laws are universal). Kant explains further that if lying became morally acceptable, then the practice of lying would be self-defeated (no lie would ever be believed) as no one would trust anything anyone says. Lying relies on the same trust it violates.

A Kantian framework informs us that promises should only be followed when all parties are aware of the conditions equally. Otherwise, one commits a contraction of will. Promises made on deceit or false pretenses intentionally are not obligatory. We also understand that the validity of a promise is built on mutual trust. Otherwise, the practice of promise making is empty in concept (contradiction of thought).

The Hippocratic Oath is foundational to dental school education. Each oath taken has variations. So, one has to evaluate each commitment undertaken. Oaths are promises made to the public so must be obeyed as not to exploit its trust. To exploit is to do harm. On the other hand, some promises may be harmful themselves. We do not have to respect all promises as we all have a duty never to harm. Promises that are obligatory are ones where everyone is informed of its requirements and promises that are valid (not empty) are ones with mutual trust.

Different dentists take different oaths so it is up to you to understand the oaths you take. You must determine which ones are valid and come to recognize your own obligation to obey them.

Why Metaphysics is Still Relevant to Dentistry