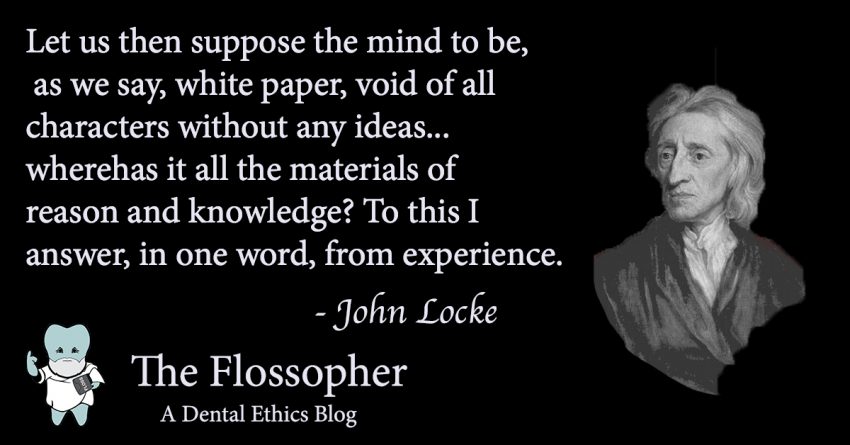 This blog post will help to develop understanding of the concept of autonomy and its importance to ethics. We will juxtapose it with the concept of personal choice. Respect for autonomy is a very important principle in dental bioethics but it is often conceived as respect for personal choice. While modern day ethics is colloquial enough for dental students to understand, it still has the philosophical concerns outlined in the Intro to Dental Ethics. While respect for personal choice is very appealing to an American mindset, we want to find our true moral obligations, not stick to something culturally or legally intuitive.

We can give an etymological analysis to the word autonomy from its ancient Greek origin. “Auto-” means “Self” and “-Nomos” means “Law.” Thus, autonomy can be said to mean governing one’s actions by one’s own principles or laws. An autonomous state makes its own laws for its citizens to follow. However, etymological definitions have the problem of being too literal, such as in the case of the word metaphysics, which is an inquiry into the first principles or nature of reality rather than what is “beyond physics.” Etymological definitions can also miss out on the complexity the underlying meaning of a word, such as when all philosophers as labeled as just “lovers of wisdom.”

The Agent Theory of Free Will

The etymological origins of the word autonomy will become more significant to the reader once introduced to free-will/morality debate. Autonomy is important to ethics due to its utility as a theory of free will. Many have claimed that one’s actions are not morally reprehensible if they are not free (the idea is that free will is necessary for any moral theory to be followed). If one misses a dental appointment because they got the flu or they cannot floss because their hand is broken, they aren’t morally responsible for their actions. Thus, the consequences of their actions, either benefit or punishment, they are not deserving of. I, as a dentist, should be understanding and not scold them for their transgressions. Then again, I may not have a free will to control my own actions.

Before we fall into moral nihilism, we need to make a philosophical distinction between what one is obligated by and what one deserves (praise and blame). One might not be physically free to floss, so they cannot be blamed or punished for a transgression but they are still obligated to floss twice daily (by the “laws” of dentistry). Obligation is imparted by the conception of law. Laws are necessary rules we must follow, not just mere suggestions. The free will debate might never end but we can side step the debate by having the understanding that autonomy obligates those involved.

One can point out that not all laws are obligatory, especially unjust laws. One dentist might declare “No one should ever chew on ice.” We can never have just ice! It should be acknowledged here that laws are not obligatory because they are of the linguistic form of commands, i.e., merely use the word “must.” Necessary rules are formed or identified using correct practical reason – applying the categorical imperative. We first start with a maxim (I should do X for the sake of Y). The practice of Y allows the will to decide upon the action. For example, one must brush well given the practice of maintaining oral health. The action is conditioned upon the practice and the practice is absolutely moral (not conditioned) if it can be universalizable (must be accepted by all agents trying any will rationally). A practice or set of rules is universalizable if it passes the rigorous tests of practical reason (the contradiction of will and thought tests – see Intro to Dental Ethics).

It is reason’s unique ability to determine what applies universally (applies to all) and necessarily (must apply). Thus, one’s ability to be an autonomous agent (govern oneself by a conception of law – the categorical imperative) legitimizes its own unconditioned respect (its moral obligation). Since what is meant by good or moral (what has absolute worth) consists of that as a formal ground, any rational agent must respect theirs and another’s autonomy over all.

What is Personal Choice?

A lot of critics of the categorical imperative outcry a dismissal of such rigorous philosophical reasoning and an appeal to the importance of our instincts, feelings, religious and cultural beliefs, and parental upbringings. It is not that those things aren’t valuable in a way or that there are not other things that have unconditional worth. Personal choice must obligate to demand that any agent must respect it, not be merely conditionally suggestive. As we saw with autonomy, through practical reason we can universalize a maxim as a necessary rule (a moral law). This will not be possible for a maxim that is empirically given to us and fails the tests of practical reason.

John Locke introduced the idea of the tabula rasa, the mind is blank at birth and ideas are learned from the without. We are aware of certain instincts like fear of snakes and certain genetic predispositions people are born with. Other than that, the feelings we express, religious and cultural beliefs we hold, and the fortunes (character traits, traditions, etc.) given by our up-bringers are conditioned empirically. This means that (1) all our goals and our understanding on how to achieve them is first given to us from the without then made personal within, (2) conditioned by the circumstances they were given, and (3) none of them are in-themselves universal or necessary known to us without application of reason.

Personal choice consists of the end and the means to those ends (the maxims) by which a singular person identifies with. “I don’t us manual tooth brushes; I feel my teeth are more clean with an electric.” This is an example of a personal choice a patient might have developed by her experience – she was not born with this idea and its appeal to others is conditioned by her circumstances. She also learned that a particular toothbrush feels more clean but one can just as well maintain good oral hygiene with a manual as studies have shown when individuals are handicapable. It is also important to acknowledge that her feeling that her teeth are clean is not a way to universal an obligation to others (since people have different subjective standards of cleanliness). I personally feel cleaner with my traditional brush then those machines. Her personal choice to use an electrical toothbrush is neither universally or necessarily applicable and so nothing morally obligatory for me to follow. Personal choices do not necessarily obligate others to also follow. She can use her electric and I can use my manual.

Luckily we live in a world that we usually come to agreements of instinct, feelings, religious and cultural beliefs, and ancestral traditions. When we do not come to agreement, there is practical reason to resolve issues. One may question the need for resolution at all. “Can’t every one live life with their own opinions”? I have no idea of the fact of this, but we can analyze it ethically. Let us rephrase this concern as an ethical relativistic maxim (ERM): “Respect everyone’s personal choices because all personal choices are just as legitimate.” This kind of ethical relativism appears to be perfectly cognizant in the tooth brush case as illustrated in the last paragraph. My choice to use a manual toothbrush is just as someone’s preference for an electric if the decision was made on a feeling of cleanliness. We were not making moral laws however; we were making judgements based on feelings. Hypothetically, my hygienist might point out, after having carpal tunnel surgery, that an electric tooth brush is going to give a better clinical objective clean. If we take scientific measurements of disease and health as more legitimate than feelings of clean, then we must drop our ethically relativistic maxim.

One way to understand autonomy in a moral sense is to recognize it as governing one’self with a concept of law (a universalizable necessary rule). This sense of morality is not a theory that is merely a suggestion but what one must do, is obligated by even if not worthy of praise or blame. It is practical reason (the application of the categorical imperative) that we get the morals laws that apply universally. These universal principles we can apply to a myriad of circumstances and resolve conflicts and bring moral character to our actions. The human condition is not merely to act out of instinct or heuristics. Practical reason is in stilled in us and gives us unqualified dignity that must be respected by all those that have practical reason. Which all the personal choices we make out of instinct and all the conditions of human existence make life much easier to live (and so has instrumental value), it is autonomy that deserves moral respect.